To the left of the apse is the chapel of Saint Adalbert. Founded by the Confraternity of Molinarians, who officiated there until 1846, the chapel originally bore the title of St Paulinus of Nola, under whose protection the Molinarians had wished to place themselves. The relics of the Nola man were later transferred to the cathedral of the Campania city in 1909. The floor, as a stone inscription recalls, was completely redone in 1870 by Giuseppe Renzoni. In the centre of the barrel-vaulted ceiling is a fresco by an anonymous Roman master, depicting St. Paulinus in Glory, dated 1750. The rest of the wall decoration features plant motifs, trophies, bishop’s insignia, two false windows and two monochrome paintings with mills on the Tiber. There are three marble tombstones in the chapel. Of particular note is the one on the left wall, written in Italian, which recalls the events of the chapel up to 1626 and bears a water mill, symbol of the Confraternity, engraved on the lower part. The 18th-century altar was demolished during the 1976 restoration and replaced with the current one, designed by Franciscan Andrea Martini. Inside, the metal box with the relics of Saints Adalbert, Esuperantius and Sabinus is visible. The antependium of the old altar has been walled up in the back wall and adorned with a marble tondo commemorating the millennium of the Prague diocese (973-1973). On the wall is a large centred canvas with the Virgin and Saints Paulinus, Adalbert, Sabinus and Exuperantius. The work of an unknown Roman master, it was made for the Brotherhood of the Molinari in 1655, as can be read in the coat of arms displayed by the angel in the lower part of the painting (“UNIVERSITAS / DE / MOLINARI / 1655”). Above the large altarpiece, there is a fresco on the back wall depicting an Annunciation, a 17th-century work, contemporary or later than the painting as it respects its outline. On the sides were two images of saints, now lost, and, at the bottom, the two beautiful monochrome paintings of Mills on the Tiber, only partially preserved. On the altar is an icon of St Adalbert, offered by the Gniezno diocese to John Paul II and donated to the Basilica. A door on the right wall leads to the present sacristy of the basilica. In this room, above the imposing wooden cupboards, there are two fragments of a detached fresco and a canvas by Antonio Carracci depicting St Charles at prayer, which originally decorated the altar of the church chapel dedicated to the Bishop of Milan. 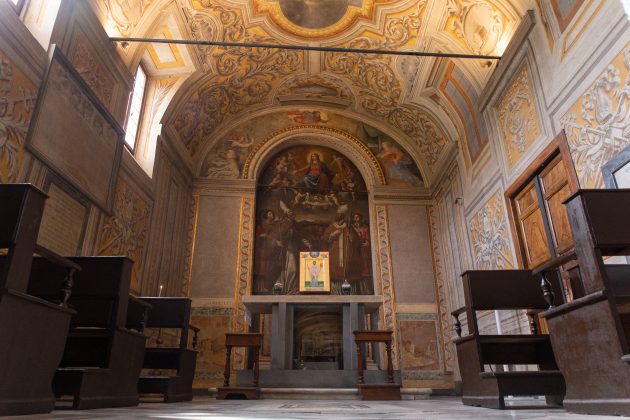