The icon represents the assembly described in the book of Revelation of St John: "After this there appeared an immense multitude that no one could count, from every nation, race, people and language. They all stood before the throne and before the Lamb, wrapped in white robes and carrying palms in their hands". And the history of the 20th century is not just that of a few brave Christians, but that of mass martyrdom, as Andrea Riccardi writes in his book 'The Century of Martyrdom'.

The Icon of the New Martyrs and Witnesses of the Faith of the 20th Century, painted by Renata Sciachì of the Community of Sant’Egidio, depicts the story of the witnesses of the past century in light of a theological reflection centered on the book of Revelation. At the top of the icon is Christ enthroned, surrounded by angels and a crowd of witnesses to the faith, dressed in white, carrying palms in their hands: this is the image from the book of Revelation, in chapter seven, when we read:

“After this, there appeared an immense multitude, which no one could count, from every nation, race, people and language. They all stood before the throne and before the Lamb wrapped in white robes, and they carried palms in their hands. […] One of the watchmen then turned to me and said, “Those who are clothed in white, who are they and whence are they from?” I answered him, “My Lord you know,” And he said, “They are those who have passed through the great tribulation and have washed their robes making them white with the Blood of the Lamb.”
(Rev. 7:9. 12-14)

“Through the great tribulation”: these are the words in the centre of the icon and are the key to its interpretation. Beneath the inscription we see a concentration camp, with barbed wire, transformed into a cathedral: this is the experience reported by many testimonies. Catholic, Evangelical, Orthodox Christians found themselves together in the Nazi concentration camps, in the Soviet gulags, and in the common suffering for the Gospel they raised their prayer to the Lord together; they learned to love and support each other.
In this cathedral there is the open Gospel, with the words of Jesus taken from the Gospel of John “May they all be one” (Jn 17:21a) the crucifix and the Paschal candle, symbols of the passion, death and resurrection of the Lord. To the right and left are seen as two great processions of witnesses to the faith: one symbolises the Christian East, the other the West. In these two large processions one recognises people like Dietrich Bonhöffer, Patriarch Tikhon of the Russian Orthodox Church, Father Girotti (Italian Dominican, biblical scholar, who died in the Dachau concentration camp where he preached for a long time).

Continuing downwards, one notices some destroyed buildings and Christians about to be killed; it is a reminder of the genocide of the Armenians and many eastern Christians in Turkey in 1915, a rupture of more than a thousand years of cohabitation in that land.
Also recalled are all the attempts at the actual annihilation of the Christian presence, such as the one that took place in Albania: a priest with a child in his hand is seen being killed (this is the memory of Father Kurti, sentenced to death in 1972 only because he had secretly baptised a child in the camp where he was held).

On the right side of the icon we see a series of pictures; in them we understand how in the stories of the witnesses of faith the passion of Christ is retraced.
The second scene starting from the bottom presents a tribunal judging bishops: it is the unjust trial to which so many witnesses of the faith were subjected, like Jesus before Pilate.

On the way up one encounters a man dressed in gaudy clothes being beaten by two guards: this is the public humiliation that was reserved for so many Christians before they were killed, as a way of striking at their dignity, discrediting them in the eyes of the people. Above, the frame shows a crowd about to be shot, in a public execution, as happened at numerous turns in 20th century history. The first picture below, on the other hand, remembers the many murdered, those whose lives were suddenly cut short.  One sees a bishop on the altar, it is Bishop Romero, killed while celebrating the Eucharist. One recognises, among others, Mgr Gerardi, Don Giuseppe Puglisi, killed by the mafia in Sicily.

On the left instead, the panels remind us how, in suffering, the life of the ‘new martyrs’ is a testimony of love, stronger than hatred: to evil they have responded with good. The first scene offers a vision of the Soviet Gulag on the Solovki islands: it is a very old monastery, transformed by the regime into a detention camp, which gathered mainly Christians. It shows two bishops, one young and one old, pushing a wheelbarrow: it is the representation of a testimony given by a survivor who in her diary recounted of two bishops, one old and Orthodox, the other young and Catholic, who went to the extremely hard forced labour together, so that the young man could help the old man. It is a sign of Christians learning to love and help each other again in the suffering of persecution.

In the upper painting, from inside a prison, in Romania, one can identify the prisoners, each holding sheets of paper in their hands: these are parts of a single Bible (possession of which was forbidden by prison regulations), which the inmates had divided among themselves so that they could learn part of it by heart and recite it to the others, and thus not lose the precious treasure of the Word of God.
Moving up the iconic narrative, one encounters persecuted Christians who nevertheless never ceased to feed the hungry, heal the sick, love their suffering neighbours, and communicate the Gospel to all. One sees a Christian welcoming a man dressed in the uniform that, in this icon, identifies the persecutors: it is the sign of the readiness of the witnesses of faith to forgive, to trust in the possibility for every man to change his own heart.

At the celebration on 12 October, Cardinal Camillo Ruini recalled that it was at the behest of John Paul II that the Basilica of St Bartholomew became a ‘memorial place for the witnesses of the faith of the 20th century’.

“They,” he said, “are all symbolically represented in this magnificent icon, which shines in our midst and will be blessed today. The life and death of these contemporary Christians is grafted onto the ancient root of the undivided Church, venerated here in the body of the apostle Bartholomew and the martyred saints Marcellus and Esuperantius, killed during a wave of persecution in the 4th century; it is interwoven with that of Bishop Adalbert, who died in the year 997, while communicating the Gospel. It is a memory guarded by a living community such as the Community of Sant’Egidio, which, as we have heard, gathers here in prayer and fraternity. The life and death of these Christians are thus grafted into all of us and into our Churches so that they may bear fruit worthy of the Gospel. The century that closed the millennium has truly become once again a century of martyrs!”. 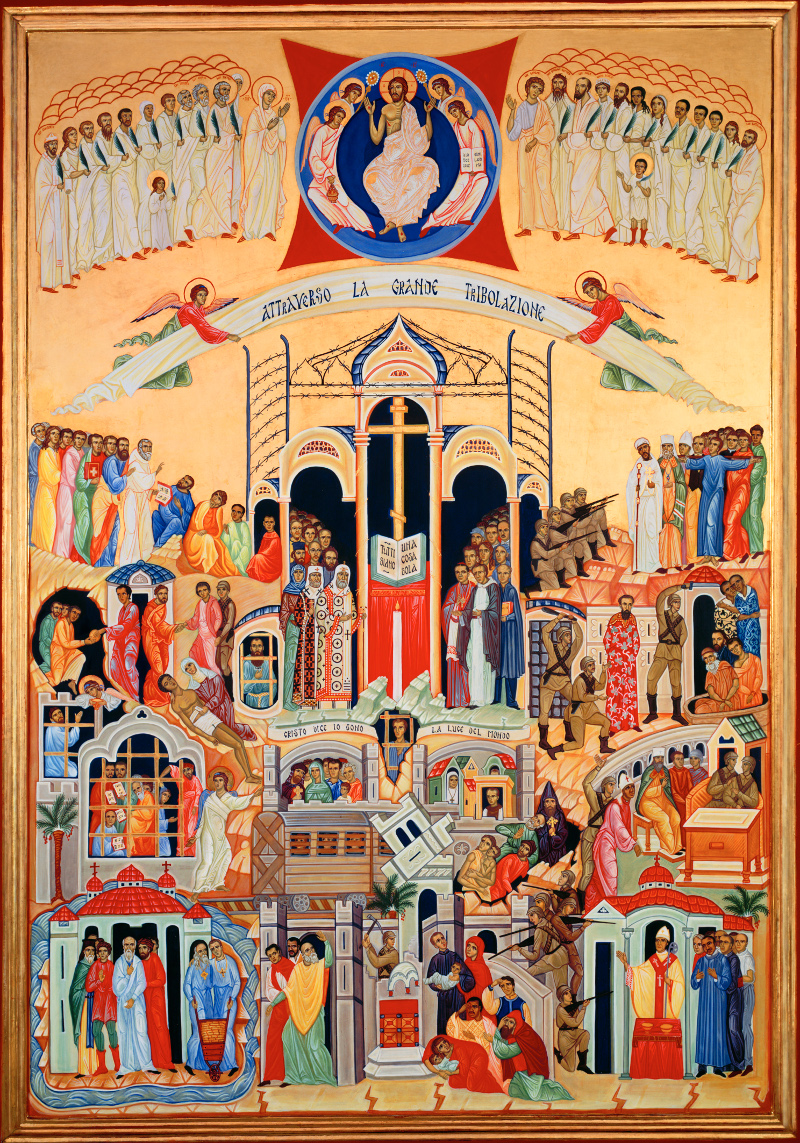