The Chapel of the Blessed Sacrament is accessed by climbing four steps, on the first of which is a pair of stylised lions, dating from the 12th century. The sculptures, characteristically the work of Roman craftsmen, probably originally adorned the entrance to the medieval church.

On the inner faces of the entrance pillars and in the sub-arch are six light stucco panels with angels with Marian symbols: the tower, mirror, well, fountain, throne and ark correspond to as many titles of the Virgin, recalled in the Lauretan litanies.

The wooden ceiling was built by Cardinal Santoro, and then completed by the Orsini family of Pitigliano, who took over the patronage of the Chapel in the late 1720s. Their coat of arms is placed in the centre of the ceiling. On the floor is the tombstone of Alessandro Orsini, a beautiful inlay of polychrome marble, commissioned by his son Bertoldo, the chapel’s first patron. The walls are entirely frescoed with the Stories of the Virgin, the work of Giovan Battista Mercati, a painter originally from Sansepolcro who arrived in Rome around 1620. An artist of complex pictorial training, difficult to fit into synthetic formulas, in this work Mercati shows himself to be influenced above all by the teachings of Pietro da Cortona. The work may have been executed between 1628, the date when the Orsini family took over the patronage of the chapel, and 1631, the year in which Mercati executed a cycle with a similar subject for the church of Santa Chiara in his home town.

Along the left wall are the scenes of the Presentation in the Temple, the Nativity of Mary, and the Annunciation. The episodes are broken up by frescoes with female figures, possibly Sybils or allegories of Virtues, painted in monochrome, like statues inside niches.

Above are painted windows that connect the chapel with an imaginary outdoor space. On the wall is a cannonball, which fell into the chapel through the window during the clashes of the Roman Republic of 1849, leaving the altar unharmed; the episode is commemorated by a plaque under the bullet. Along the right wall are the Visitation, the Nativity of Jesus and the Wedding, and two other female figures. On the upper frame of the altar frontal, richly decorated with polychrome marbles, the inscription “HIC IACET CORPUS BEATAE THEODORAE MATRONAE ROMANAE” recalls the presence of the saint’s relics, kept in a box visible through an elliptical window closed by a grille. The fresco in the apsidiole with The Virgin, Child and Saints was rediscovered in 1904 hidden behind a modern statue of the Madonna. Restoration in 1976 removed some modern repainting and restored visibility to the work. It can be dated to the second half of the 12th century, perhaps at the time of the works promoted by Pope Alexander III. The iconography of the painting is quite peculiar: a large Madonna is seated on a throne without a dossal and holds a blessing child with a rotundus in her arms. Three smaller figures of saints are found. This peculiarity has led to the assumption that this is a mural translation of an icon. In the images of the saints at the feet of the Virgin, it has been suggested that St. Theodora, whose relics are kept in the chapel altar, and Saints Abbondio and Abbondanzio can be recognised. 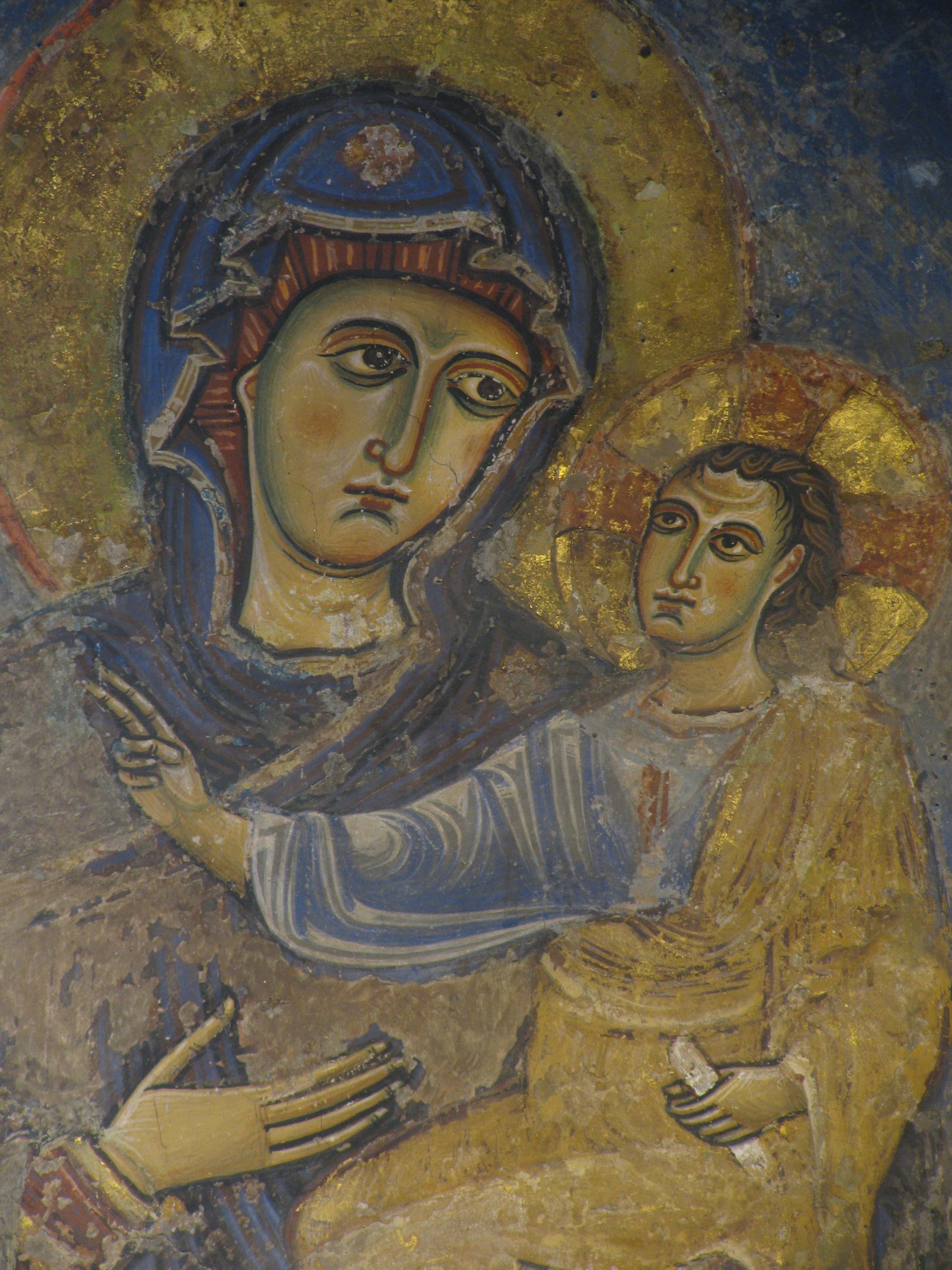